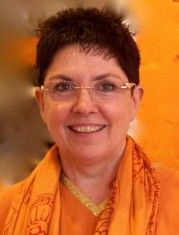 Australian born, Swami Muktibodhananda has been practicing and teaching yoga for over 46 years now. In 1993 she was given the title of Yogācharya, Master of Yoga. Swami Muktibodhananda is a published author of Commentaries on Hatha Yoga Pradipika, the Light on Hatha Yoga and Swara Yoga the Tantric Science of Brain Breathing both Bihar School of Yoga publications. Her passion is imparting the essence of yoga to a modern audience both in Australia and abroad.

Born in West Germany in 1966, Ajahn Dhammasiha studied Business Administration in West Berlin during the fall of the Berlin Wall. After encountering the Dhamma during extensive travels in India, he ordained as a Theravada Buddhist monk in 1995 at Nissarana Vana, Meetitigala in Sri Lanka. From 1998 on he trained in monasteries of the Ajahn Chah tradition in Australia. Since 2007 he has served as abbot of Dhammagiri Forest Hermitage, the first Monastery in Brisbane associated with the tradition of Ajahn Chah

Celia is a Senior Yoga & Meditation Teacher and an Ayurvedic practitioner. Committed to innovation in Integrative Medicine, Celia has educated in complementary health education for two decades. She founded the Brookfield Retreat, a beautiful yoga and treatment centre in the middle of the most beautiful natural surroundings in Australia. Celia also offers continuous training of Yoga Teachers globally through The Yoga and Integrative Medicine Institute (YIMI).

Bhavik has been practicing yoga and meditation for over 12 years, having first started in Grade 7. With a passion for making this knowledge accessible to all, he co-founded QUT’s Meditation and Yoga Club (MY Time), which has delivered yoga and meditation sessions to over 2500 people so far. As a HR Professional with a legal background, mentor, coach and a yogi, Bhavik looks forward to sharing how yoga and meditation practices have enhanced the quality of his life.